SEBASTIAN BRON Sebastian Bron is a Hamilton-based reporter at The Spectator. Reach him via email: sbron@thespec.com

Every year, two to three freshfaced co-op students walk through the doors of Roma Bakery looking for their first slice of professional work. But they seldom stick around long term. “Honestly, it is more of a rarity,” Anthony DiFilippo, one of the family owners of the longstanding Stoney Creek business, said of teens being hired after a semester-long placement. “We’ve had a few come on, but not in a serious role.” Then there’s Sonia DeSimone. The 24-year-old has quickly risen to the rank of head baker at Roma after a co-op stint there as a St. John Henry Newman Catholic School student in 2015. “It’s a full-circle moment because I started with a goal to be a head baker and ended with that same goal,” said DeSimone, who studied baking and pastry arts at Niagara College after graduating high school. But what’s more “full circle” than landing your dream gig? Mentoring another co-op student from the same high school and with the same dream. When Emilia Daich,15, started an apprenticeship at Roma last month, it was as if time flipped back eight years. “There’s lots of similarities between her and Sonia, especially in their passion and ability,” said DiFilippo. “It was the shortest amount of time before we said, ‘Oh my god, she’s perfect,’ because she really likes it and shows an interest.” Daich said it’s been her “dream since third grade” to become a pastry chef. “One of my fears is that I won’t get far, but seeing someone who was in my place really helps,” she said. “I was very excited when she came in and found out she was going to be pursuing a pastry chef (career) like me,” added DeSimone, who is a year removed from getting Red Seal. “And you don’t hear about that often — even a lot of people in my program at Niagara didn’t want to pursue it.” Daich is one of 80 to 90 St. John Henry Newman students that are sent out for apprenticeships each year, said teacher Lisa Owens. While it’s not uncommon for some students to finish their placements with a full-time job, the situation at Roma — and particularly between Daich and DeSimone — is “a rare thing to see.” “To have Sonia back working where she started, and now mentoring another youth in the co-op program, is fantastic. It’s honestly my dream,” said Owens. “When I see that, I’m just like, ‘This is why I do what I do.’” 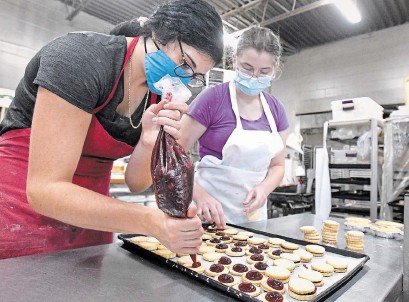