An all-Turner podium finish was so close

Tim Miller Tim Miller is the author of several books on auto racing and can be reached at timmillerthecarguy@gmail.com

When you think of racing families, names like Unser and Andretti and Force come to mind. In local racing circles, the list is short, but recently three members of the same family finished one behind the other, the first time in 11 years of racing together. “We were that close,” said Jamie Turner. “We’ve never been that close.” For the past decade, father Jamie Turner and sons Ryan and Cory have raced Sprint Cars. The three have been regulars in the Knights of Thunder 360 Sprint Car Series this year, travelling to the dirt ovals of southern Ontario in the 13-race season. In the second to last event, held at Humberstone Speedway, Ryan finished second, Cory third and Jamie fourth. “One day, we will have an all-Turner podium,” said Cory. “As a team, that was our best effort.” Although Ryan Turner won KoT race 12 at Merrittville last month, Jordan Poirier has been the Turners’ nemesis all season. This Quebec racer won eight of the 13 events, including the main at Humberstone ahead of the three Turners. Ryan was second in season points behind Poirier, Cory seventh and Jamie 10th. “Poirier gave us a good asskicking this year,” said Cory. “We’re going to work on our program some more for next year.” The Turner sons are thirdgeneration drivers. Jamie’s father, Don Turner, plied the Niagara-area dirt ovals for 40 years with his Modified. Jamie, now 61, and a Caistor Centre resident, drives for himself. As part of Jason and Celeste Hill’s Burger Barn Racing team, 33year-old Cory, from Tillsonburg, and 30-year-old Ryan, of Dunnville, fly the team’s flag. While the Turners don’t travel together down the road to race tracks anymore, they do set up together in the pits, and Jamie is the crew chief for all three of the winged, 360-cubic-inch powered cars, which are worth about $75,000 each. The cars are capable of 100-m.p.h. laps on a three-eighths mile oval in about 14 seconds. All three Turners will be back for 2022. “We’re not retiring,” said Cody. “We had a good year this year and we are going to work on sharing a podium next year.” NASCAR announced its 2021 Hall of Fame Induction Ceremony will take place in January. It was postponed from February of this year due to the pandemic. Inductees include exCup racers Dale Earnhardt Jr. and Red Farmer, and Mike Stefanik who competed in NASCAR’s Whelen Modified Tour. This will be the 12th induction ceremony since its inception in 2012 and will once again take place in Charlotte, N.C. Flamboro Speedway will hold its Frostoberfest Day 2 this Saturday, a day of racing postponed from Oct. 3. Heading the event will be the Don Biederman Memorial 100-lap Pro Late Model feature, the final race of the Grisdale Triple Crown, with Shawn Chenoweth and Shae Gemmell tied in points and Kyle Steckly only six behind. Other racing includes 50-lappers for Outlaw Super Late Models and Super Stocks, a 40-lapper for Pure Stocks and a 25-lap Outlaw Midget feature. Tickets can be purchased only at the gate at $30 for adults and $25 for seniors. Gates open at noon with the green flag to drop at 2.30 p.m. 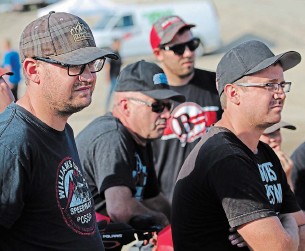